A Quaker Response to Animal Suffering

This spring I followed ‘A Quaker Response to Animal Suffering’, a Woodbrooke online course, which was an exploration of attitudes to animals, through historical, theological and cultural perspectives It also included a very clear picture of the uses (and abuses) we make of animals today, and how people are working to counter animal suffering. And of course it presented the challenge – how should Quakers be responding? Once one was into the course the frequent opportunities to share one’s responses called forth a richness of views from other participants. There was a wealth of material available and I’m grateful to Martin Layton and Steve Palmer, who facilitated the course, for permission to use some of the quotations below. 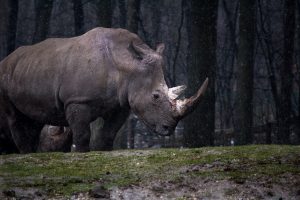 Photo by Ronald Gijezen on Unsplash

This was not a prescriptive course, telling us what we should think. (‘A’ rather than ‘The’ Quaker response) but what it aimed to do was awaken us to the reality of animal suffering and gently query why we choose to turn away. We were challenged to consider the material on several levels – what is our instinctive response? What is our spiritual response? How would we begin to word a Quaker testimony to animal suffering?

The section which looked at ‘Science, Research and the Military’ is perhaps the one where it is most surprising that Quakers as a body have not spoken out. Since Quakers as a whole have taken a stand against war and are clear-sighted about its evils, it might be expected that the abuse of animals, as part of our ‘war effort’, would be roundly condemned.

The use of animals for medical research is of course a more complex issue but, even leaving aside the increasing evidence of the fallibility of such research, anyone with a sense of the value of each part of creation, indeed anyone who would personally recoil from inflicting cruelty on an animal, should perhaps pause to consider the balance. And if we think there is a balance to consider (understandably in anyone who is desperate to find a cure for a loved-one) we should at least be clear-eyed about what is involved.

I cannot believe it is the Creator’s will that the preservation of human health should involve the torture of other creatures. As a sincere believer that God is Love, I hold it as my duty and privilege to ‘shew a loving consideration for all God’s creatures.

We are wilfully blind to the cruelty involved in the experiments themselves, (and I’m not going to list examples which I find personally horrendous) but the unnatural living conditions in the laboratories in the first place result in abnormal behaviours such as pacing, rocking, swaying, and constant rubbing against cage bars and it has been suggested that these conditions themselves create unreliable data and so undermine the validity of the experiments.

There is, as American animal advocate and writer Mark Hawthorne has suggested, a central contradiction at the heart of animal research: we use animals because of their similarities to us, but we position them outside of our moral concern because of their perceived differences.

Hayley Rose Glaholt, in her 2012 essay, ‘Vivisection as War’ makes the connection between Friends’ anti-vivisection witness and their testimony to peace and indeed in 1886 Alfred W. Brown, in the Friends’ Quarterly Examiner, argued that it was hypocritical of Friends to witness selectively against particular expressions of violence:

There is surely something wrong here. To frown upon one species of cruelty, and at the same time to wink at other forms which are infinitely worse, is very much like straining at a gnat and swallowing a camel. Such a position is not only illogical, it is strangely inconsistent and unsatisfactory.

Nowhere is this connection more obvious than in the use of animals in, and in the preparations for, warfare. We ‘award’ individual animals that have served us in wartime – the valiant battle-horse for example, which somehow allows us to feel better about, or ignore, the fact that 8 million horses died in World War 1. The accounts of the Bikini Atoll nuclear tests in 1946 usually fail to mention that these tests included 3,030 rats, 176 goats, 147 pigs, 109 mice, and 57 guinea pigs, positioned in boats beneath the explosion in order to measure the impact of the detonation on living flesh. Mark Hawthorne has pointed out that “some of the pigs—used because their skin approximates that of a human’s—were dressed in navy uniforms to see how the fabric would respond.”

Nor is this purely historical. We know that the teaching of combat casualty care involves inflicting gunshot wounds, amputations, burns and lacerations on animals. Between 2006 and 2009, Britain’s Ministry of Defence conducted tests which involved blowing up 119 live pigs at its military research facility at Porton Down. When public outcry forced the abandonment of this testing it was moved to Denmark and British vets travelled there to perfect their skills in treating wounded soldiers.

The denial of Quaker attention to the reality of the suffering we inflict on every other species in creation is, at the very least, a puzzle to me. At my most charitable I put it down to embarrassment, a desire to be taken seriously by the world rather than as bunny-huggers. But as a Quaker I am embarrassed by this embarrassment, a wilful blindness to the suffering we inflict through our most mundane and daily choices.

John Woolman said it clearly in 1772

I was early convinced in my mind that true religion consisted in an inward life wherein the heart doth love and reverence God the Creator and learns to exercise true justice and goodness not only toward all men but also toward the brute creation; that as the mind was moved on an inward principle to love God as an invisible, incomprehensible being, on the same principle it was moved to love him in all his manifestations in the visible world; that as by his breath the flame of life was kindled in all animal and sensitive creatures, to say we love God … and at the same time exercise cruelty toward the least creature … was a contradiction in itself.

My hope is that just as some concerned Quakers undertook the hard struggle to convince their slave-owning Friends of the iniquity of that system, and ultimately carried the Society with them as a powerful force to change the views of society as a whole, we can act in the same way to confirm our responsibility towards the whole of creation.