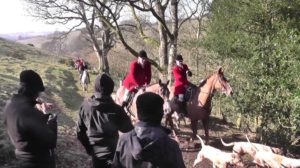 Boris Johnson, like Prime Ministers Teresa May and David Cameron before him, seems to favour repeal of the Hunting Act. What must it be like to be one of the people willing to go out in all weathers, witnessing and recording what is happening and sometimes managing to save an animal from a horrific death?

HOW ARE INDIVIDUAL HUNT SABOTAGE GROUPS SUCH AS YOURS ORGANISED?
SVHS are affiliated to the Hunt Saboteurs Association (HSA), and work in keeping with their ethos. 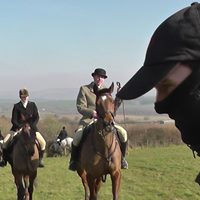 The HSA supports its affiliated groups with advice and financial grants to help with equipment usually. All groups have to fund raise to help cover costs.

This is a piece about how the HSA started https://www.huntsabs.org.uk/index.php/about-the-hsa/hsa-history
ISN’T FOX HUNTING ILLEGAL?

While hunting with a pack of dogs is illegal, the Hunting Act is flawed and means hunting can carry on almost as it did before the ban.

Currently, Severn Vale (amongst other things) are working to try and stop the Berkeley Hunt from its public Boxing Day meet in the town of Thornbury.
Current Situation.   In the UK it is legal to hunt and kill deer, game birds and hares. Under the 2004 Hunting Act, it is illegal to hunt foxes, mink and otter. An ‘article in ‘The Independent’ stated in April 2018 that 405 reports of illegal hunting activity had been made to the League Against Cruel Sports. This includes catching fox cubs and leverets (baby hare) to train hounds to enjoy killing. 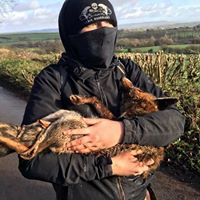 DO YOU ONLY TAKE ACTION AGAINST FOX HUNTING?
Hunt saboteurs act against all blood sports, most typically sabs try to stop fox hunting and hare hunting.

Shoots are sometimes sabbed  and last year some of Severn Vale went to the Yorkshire Moors to stop the grouse shooting with other groups.

Some groups including us are active against the badger cull which is spreading across the country.

We are active all year round and in the summer we try to sab elusive mink hunts. Mink hunts destroy river habitats and threaten protected otters ,water voles and river dwelling birds.
Damage by FoxHounds. Lambs, chickens and companion animals can be harassed or mauled by uncontrolled hunting dogs running across farms and private gardens. 145 such ‘havoc’ incidents were reported according to the April ‘Independent’ article. Hare, deer, mink and otter can also be injured or killed. The hound pack may randomly run along roads and railway lines, endangering traffic and themselves.
HOW OFTEN DO YOU GO OUT SABBING?

We work all year round on animal related matters.

As a group we aim to go out once a week at least in main hunt season. Some of our group dedicate a great deal of their time to fighting against the badger cull. We act on local knowledge, tip off’s and so on to get hunt meets.

HOW DO YOU SABOTAGE A HUNT?
The tactics of hunt sabotage depend on the type of hunt and their quarry. It is important to stick with the hounds rather than the people as it’s them who usually kill. If hounds are in cry after an animal, we rate the hounds by shouting certain commands. We use voice and horn calls. Whips can be cracked so the noise stops the hounds. A gizmo is a speaker from which hound noises etc can be played to distract hounds. Our aim is to stop animals being hurt or killed, this sometimes means stopping traffic because hounds are on the road, or sitting on a badger sett to stop a fox being dug out!

For the past season we have focused on hare hunts.

When we sab fox hunts we cover more miles on foot, keeping up with the hounds and horses it can be very fast paced.

APART FROM COMPASSION AND DETERMINATION, WHAT SKILLS ARE NEEDED?
Different sabs have different skills. Some are great at map reading, some are good at playing the horn (ed.hunting horns and calls are used to distract the hounds)

DOES IT TAKE A LOT OF MONEY TO RUN A SAB GROUP?
We have lost some equipment in the past. 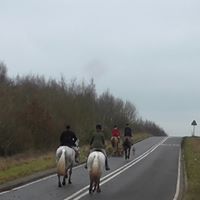 Sabs greatest running costs are in fuel. We have just bought some dash cams for the vehicle. We do need to buy some more OS maps. We always ensure we have recording equipment when sabbing to gather evidence .

Good footwear and waterproof’s are something all sabs need to buy themselves, we will have days where we go home soaking wet and tired.
CAN SABBING BE DANGEROUS?
Hunt saboteurs are frequently subjected to violence. Sabs do not instigate violence, our sole aim is to save animal’s lives.

There are personal costs to sabbing as well as it can dominate lives. It can be very stressful when we know animal’s lives depend on our actions. Sabs are regularly insulted and sometimes we are injured. We have been subjected to physical attacks in the past.
Welfare of Hunt Animals. Hounds are selectively bred and excess puppies killed. Only those who make the grade in training are kept.  After working 6 or 7 years, hounds are usually shot. According to the Countryside Alliance’s own figures in 2016, 30,000 per year were ‘retired’ in this way. (www.houndsoff.co.uk) Hunt horses sustain injuries to hooves, legs and back, through galloping in rough terrain, along roads and over hedges or barbed wire fences(www.foxhuntingevidence.com).
WHAT CHANGES WOULD YOU LIKE TO SEE?
We need to see a complete ban on killing animals for pleasure or profit. The Hunting act needs strengthening in several ways. It is not illegal for a group of people to go out on horses with a pack of hounds. The trouble is that the hounds are considered to be working dogs and therefore exempt from the laws that govern pet dogs. The Act allows for wild animals to be ‘accidently’ killed.
WHAT IS REWARDING ABOUT SABBING?
When we finish a days sabbing it is rewarding to know we have potentially saved several lives. Strong friendships are formed between sabs and there is good camaraderie.

To follow SVHS see their facebook page @SevernVale Sabs.
If you want to become involved, know more about sabbing, or give a tip off about illegal activity, go to the HSA website. http://www.huntsabs.org.uk
For more details and background about legal and illegal hunting of various animals http://teamfox.org.uk/about/32-why-choose-us/46-fox-hunting
Overview on ‘cubbing’ https://www.league.org.uk/cub-hunting

all photos courtesy of SVHS