ANALYSIS OF THE ECUADOR REFERENDUM – BULLFIGHT

Our advisor on bullfighting, the ethologist Jordi Casamitjana, has, at our request, provided this very detailed analysis of the results of the referendum in Ecuador:

“I have been very involved in the campaign to ban bullfighting in Ecuador, so I know it very well.

The referendum question proposed initially by the government changed quite a lot. It started quite clearly asking for a total ban, but it became more and more ambiguous. It was finally sent to the Constitutional Tribunal for approval, and changed even more by them. All these changes came from the bullfighting lobby trying to avoid a ban, which had members in the government itself, including the vice-president.

This is how the question finally ended up:

“Regarding the prohibition on killing animals in spectacles, do you agree that, in the municipality where you live, the spectacles that have as purpose the killing of the animal should be banned?”

The results of the referendum are mixed. Some are good things and some bad.

So, to sum up, there is no reason to be overjoyed, but nor to be depressed either.

In order to be able to evaluate these results, consider something nearer home – foxhunting and the Hunting Act. Some people from our side rejoiced when the Hunting Act was passed, others thought that it was not enough, some who saw hunters being convicted with it said “you see, it works”, and others who saw hunters getting away with illegal hunting said “you see, it doesn’t work”.

In Ecuador we are facing a similar situation, but worse. It is worse because the question was worded in such a fashion that it can be interpreted in many ways. So both bullfighters and anti-bullfighters are claiming victory, but we will only really know who actually won when we see how politicians, both national and local, interpret the question and the results. Imagine how complicated the situation could be if each municipality interprets it completely differently.

Here’s the question again:
“Regarding the prohibition on killing animals in spectacles, do you agree that, in the municipality where you live, the spectacles that have as purpose the killing of the animal should be banned?”

This is how we interpret it: The only “action” that the question says “should happen” is the “banning of certain spectacles”, and the only way to distinguish which spectacles should be banned is their purpose, not their form. The only spectacle in Ecuador which has as its purpose the killing of an animal is bullfighting, so bullfighting should be banned.

However, the bullfighters (and now the Government) interpret the question to mean that the public does not want to ban bullfighting, but only reform it, to eliminate the killing of the bull in public. There is nothing in the question regarding “in public” or “in private”, and we know that once you hurt the bull it will not survive and this is why they always kill it afterwards, even in the Portuguese and North American bullfights; therefore the “purpose” of the death of the animal exists in all the versions that the bullfighting industry say they may try now in Ecuador.
Bullfighters disagree.

If we look at it from a purely “legal” point of view, we would think that our interpretation of the question should indeed lead to an abolition of bullfighting in Ecuador, since each municipality where the YES won and either does not change anything, or only reforms, instead of banning bullfighting, could be challenged successfully in the courts; and if that damaged the industry enough, it would not be able to survive only in the municipalities where the NO won. These would anyway be threatened, since the campaign for a national ban would continue, and sooner or later would be successful.

However, if you look at it from the political point of view, the picture is quite different, since here you have a country with many pro-bullfighting politicians, judges, councillors and lawyers, who may as well interpret the questions as they please and stop any attempts at a ban for a long time, using “reform” as an excuse for burying the referendum question into oblivion.

To show you how complex the situation is, let’s go back to the Hunting Act analogy.
Now, imagine that instead a Bill being passed in Parliament (Using the Parliament Act to overrule the House of Lords opposition to it, by the way), the Government had put the question in a national referendum worded as follows:

“Regarding the methods of pest control used in the countryside, do you agree that, in the county where you live, the sports that use dogs to chase wild mammals other than rabbits and rats, and have as main purpose the killing of such mammals, should be banned?”

Now imagine that in London, Manchester and Birmingham the majority vote for YES, but that in the majority of counties where hunting is traditional, the NO wins.
What a mess, isn’t it? Imagine the Countryside Alliance then coming out saying that the purpose of organised foxhunting is not killing foxes, but just chasing them with horses and dogs, so the only thing that should be banned in those counties where the YES won is the killing of the fox by the terriermen.

In general, you would consider this situation far from satisfactory, would you not? But it may be better that no change at all, would it not?

Now, let’s add another twist that makes the analogy even closer to the Ecuador case. Imagine that in Devon, the keenest hunting county, and the only one where stag hunts still exist, the YES won. Then there certainly would be good reason for not feeling depressed, would there not?

Well, that is the situation with the YES victory in Quito.

As you see, the referendum is not the end of anything, but the beginning of something very complex, that may well end up being the first total abolition of bullfighting in a whole nation in the 21st century, or may not.

Many thanks from Quaker Concern for Animals, Jordi, for this helpful explanation.
For Jordi Casamitjana’s Animal Protection Consultancy, please visit: www.animal-protection-consult.com 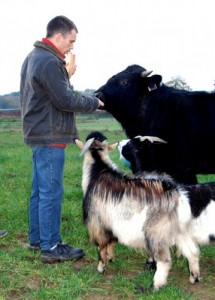 The photos illustrating this article are of Fadjen, the Spanish bull rescued by Christophe Thomas in Brittany. More about them in our article  French Bullfight Update in the archive, May 14. 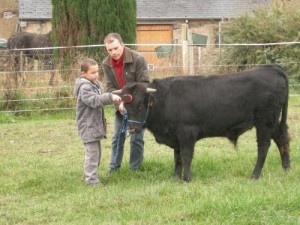