My involvement with Scooby

As a child, I always had a special interest in and affection for animals. I was naturally horrified by tales of animal cruelty, particularly about bullfighting in Spain. My love for animals stayed with me and I spent a lot of time in my 20s raising money in street collections for various animal charities, protesting, signing petitions and trying to live ethically.

I became involved in Greyhound Compassion after hearing about the amazing work they were doing in Spain. I decided to see the shelter for myself, but I was rather apprehensive because I thought I would find it upsetting, as there were so many dogs and cats there without a home.  However, I was relieved to find that it is actually a place of great hope and happiness! For example, I have memories of dogs who had been temporarily separated from their friends looking overjoyed when they found them again and running and playing together. On one occasion a truck full of starving dogs arrived so we put food out for them, thinking they would be ravenous, but they ignored the food and licked our fingers instead because they were so happy to be out of the hellhole they had come from. They instinctively knew they were in a safe place.

There were sad moments too though; one that never left me was of going into a large kennel full of big dogs and watching them all jump on top of each other, facing the wall in the corner because they were absolutely petrified of people.  I can’t imagine what someone had done to them to make them so scared. At least they now had a chance to find a good home. The dog in the photo was a favourite of mine. He was a very gentle, melancholy dog and who looked like he’d had his muzzle twisted. 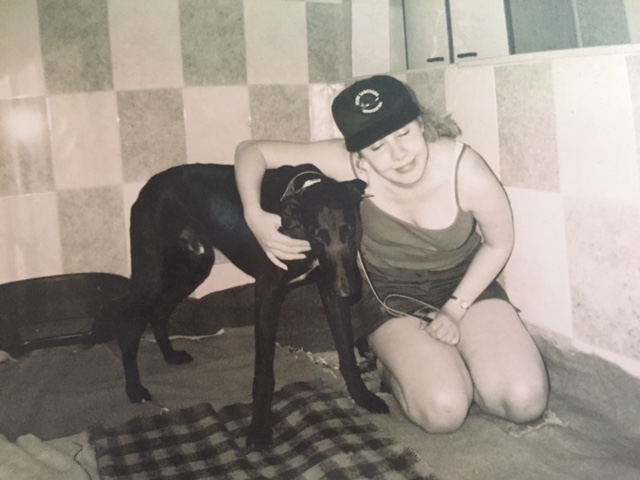 I helped out at Scooby several times but I wasn’t a Quaker then. Yet, I did feel a sense that the work that was being done to help the dogs and cats at Scooby had a spiritual dimension. This was reinforced by the reference to Saint Francis of Assisi next to the entrance, who believed that humans have a duty to protect animals. Since then I have become a Quaker and I believe that there is that of God in every creature. I have always remained a member of GC and nowadays I like to the read the Scooby updates to see how the shelter continues to grow from strength to strength, with volunteers from around the world offering their time and skills to assist the amazing Fermin, who has committed so much of his life to the animals.

Some of the greyhounds I met at Scooby had Irish markings burnt on them, so it was clear that the trade in greyhounds is international and that is why Greyhound Compassion supports dogs in Ireland and England too who suffer as a result of it. I am absolutely delighted that Quaker Concern for Animals is supporting Greyhound Compassion by sponsoring two fantastic dogs: Magic, the ambassador for mistreated greyhounds in the UK, and Brisa, the galgo rescued from appalling conditions, who is now recovering under the care of Fermin in Spain.