In one corner of my garden, under the flowering raspberry bush, there are 3 dogs: Sox, Joe and Kip. Dogs who all came to me through Many Tears Animal Rescue and are now, corporeally, no longer with me. They constitute a mixed bag of border collie companions. For each one I can easily remember, whilst touring MTAR, that moment of recognition between human and animal when we both knew each other. Their dogged companionship, what many describe as the unconditional love of dogs for their owners, continues to be with me and I think of it as “Dog” and it continues to be with me in the form of Piper. Dog is with me in that still, silent place we, as Quakers and Friends, can sometimes find in Meeting for Worship, or for me, more often in fields, woods or beaches as we, Dog and I, walk together. All three, despite their tragic backgrounds and consequent behavioural issues became wonderful best friends. Sox supported me through my worst depression, walking for miles along the beaches of Cardigan Bay. Jo, friend and companion to Sox, lifted my heart many times with his jokes and tricks. Kip, the most beautiful of them all and the most damaged, was loving and protective to the point of biting other people. 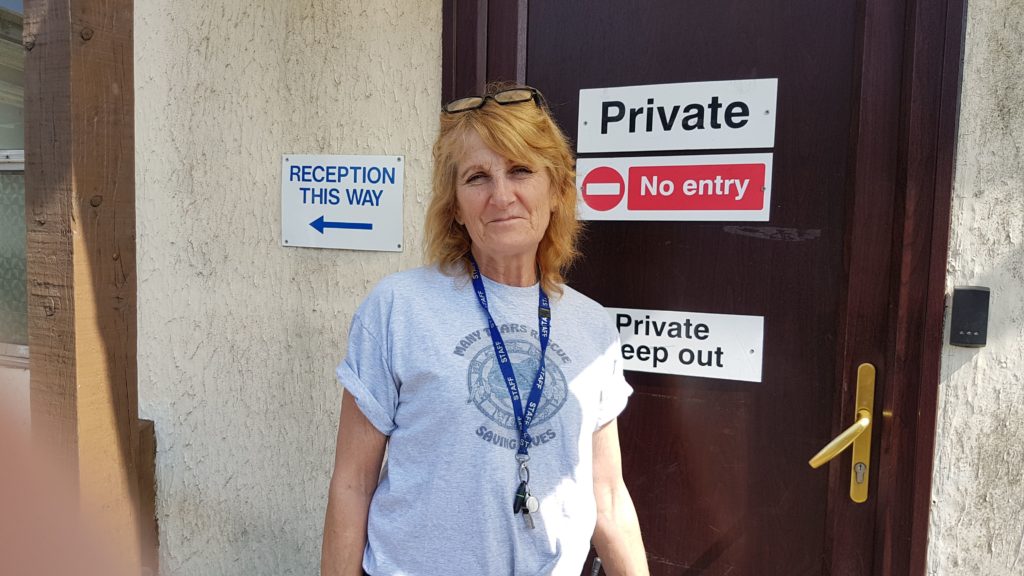 Sylvia in front of the surgery door

As well as adopting dogs from MTAR I also used Cawdor boarding kennels, run by Bill VanAtta, for quite a few years. Even though it is more than an hour’s drive it was always worth the drive to know that my dogs were well looked after while I was away. So, it was a real privilege to be able to get to know Sylvia better in the form of an interview on behalf of QCA. I used to be a volunteer dog walker and trustee of a mixed animal sanctuary at one time, so I knew what problems had to be faced. I remember once arriving for my dog walking shift and feeling completely overwhelmed by the lack of sufficient space and the inevitable overcrowding in the kennels, the lack of money for veterinary care, spaying and neutering and the lack of reliable volunteers and staff. Then there was the heartbreaking plight of the hard-to-home dogs who were seriously ill, weakened by past cruelties and/or in some other way too damaged or dangerous to live in an ordinary domestic situation. “There are just too many dogs in the world” I said to a fellow dog walker as we discussed the overcrowding in the kennels. There was a general sense of hopelessness. That particular rescue centre no longer exists and I remember it as a collection of ramshackle buildings where we lurched from one crisis to another.

So I was keen to find out how Sylvia and Bill VanAtta coped. One way is by focusing their care to the most desperate and needy: ex-puppy farm stud dogs, breeding bitches who can no longer produce the commercially viable number of puppies per year and even the puppies themselves. Based in the middle of south Wales they are close to many of the UK’s puppy farms situated in south Wales and Ireland. Sylvia regularly makes the trip across the Irish sea to rescue dogs from puppy farms and other rescues. They also take in dogs on “death row” in the pounds as well as dogs from owners no longer able to keep them. They sometimes accept cats to rehome and there are horses that are there to provide emotional support and for people and groups who can benefit from the emotional support of time spent with these wonderful animals. 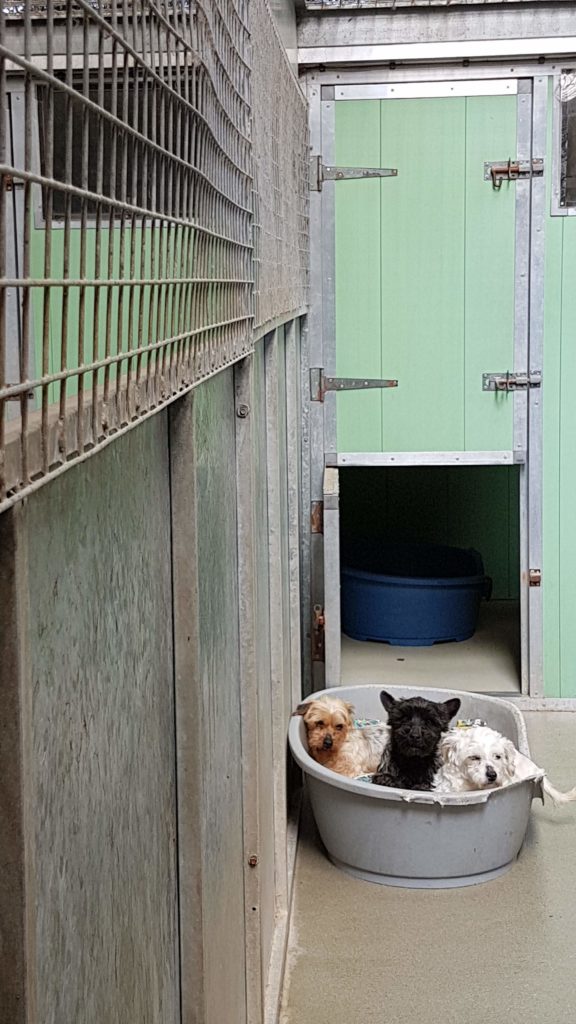 These three are clearly gaining comfort from being together and there is plenty of space for them. Not all are housed at the rescue; many are in foster homes all over the UK.

Bill and Sylvia ran a branch of the Humane Society of Richmond County in North Carolina in America where they were obliged to euthanize animals that were not rehomed; the experience affected them deeply and it led to them . (https://www.manytearsrescue.org/AboutUs.php) Sylvia has had a great deal of experience building and running animal rescue centres around the world but it was the experience with the humane society that affected her and Bill most strongly, leading them to buying Cawdor Kennels in south Wales and started the journey to the impressive establishment that I toured on Easter Saturday and Sylvia talked to me for about an hour.

There are well built, clean and airy kennels, an exercise yard with a few jumps and tunnels, a field for the horses, the veterinary surgery and Bill and Sylvia’s cottage. This is no small rescue in the usual sense as they rehome more than 3000 dogs a year, however, it is independent in that they are not a registered charity. They have well organised tours and no part of the premises is off limits, although the public is not encouraged to visit the veterinary surgery for obvious reasons.

The fact that most of the dogs have health or behavioural issues has presented Sylvia with several problems.

Obviously this is expensive and Sylvia uses various means to ensure veterinary cover such as providing veterinary experience to newly qualified vets as well as paying vets from local surgeries. The veterinary clinic is in a separate modulated building which is now suffering from the effects of the damp welsh weather. MTAR has applied for planning permission for a sturdier and more suitable building, although there is currently no money to rebuild. 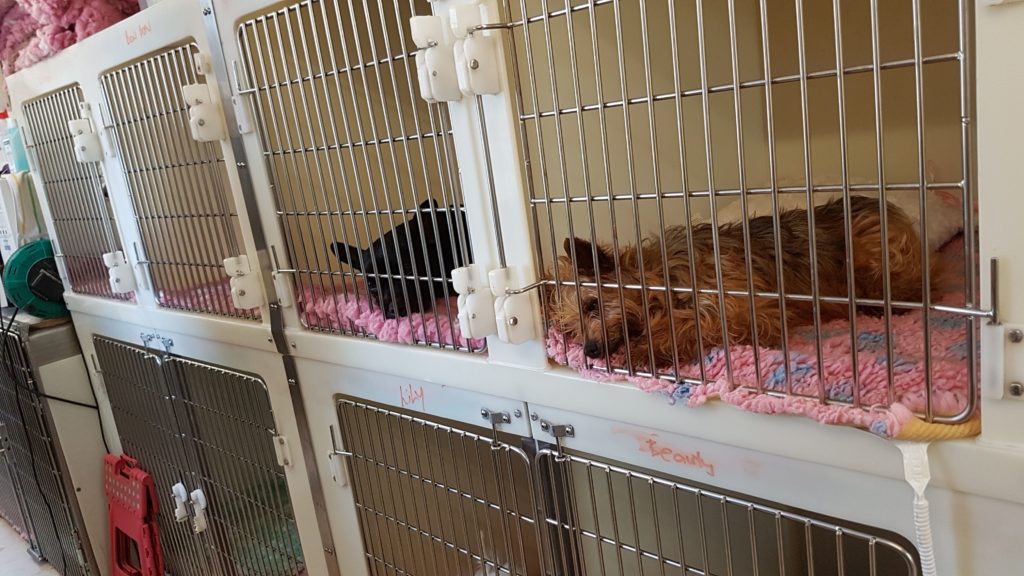 Following the interview and the usual Quakerly hiatus between committee meetings I am pleased to say QCA has now decided to support MTAR with a donation. Rescuing dogs like Sox, Kip, Jo and my current companion Piper is always going to be difficult, emotionally draining, expensive and time consuming. MTAR meets the challenges as well as any good intentioned rescue can. I came away from spending time with Sylvia convinced that she and Bill are doing the best job that can be done: helping a large number of needy dogs most of whom have suffered in puppy farms. Dog would approve. 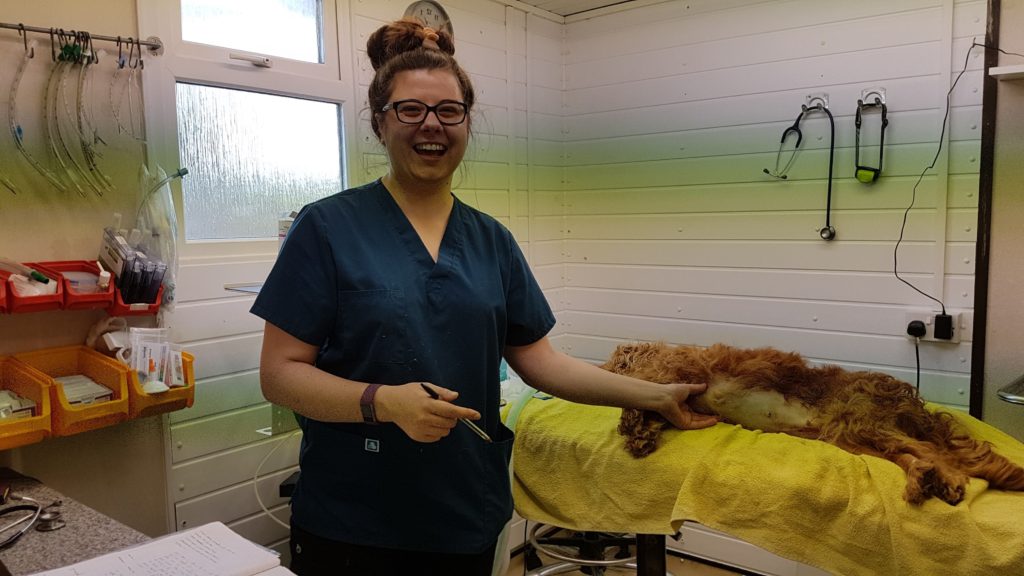