I am delighted to hear that Jon Wynne-Tyson has become a patron of Quaker Concern for Animals. He is one of the great humanitarian campaigners of the century.

I have known Jon since 1975 and he has never ceased to labour valiantly for animal issues over the years. In the 1960’s he fought a difficult but eventually successful campaign to promote vegetarianism – an unpopular cause at the time and one almost universally ridiculed. Vegetarians had become stock objects of fun during World War II and were seen as weedy odd-balls. As always, during wars, the cult of machismo was booming and all males were supposed to eat meat in order to make themselves strong. It was completely untrue of course, but everyone, under strict food rationing, actually became more diet-conscious in those years. The ‘experts’ still had the idea that protein was of prime importance and children were forced to eat dripping, lard and bully beef.

Even during the 1970’s Jon was almost alone in publicly speaking and writing to promote a vegetarian diet on moral as well as health grounds. (The other great vegetarian pioneer at the time was the scientist Dr Alan Long).

I first met Jon during the huge tsunami of interest in Animal Rights that swept the country in the 1970’s following the anti-hunt demonstrations and the publications of the Oxford Group, (chiefly Brigid Brophy, Stan and Ros Godlovitch, Andrew Linzey and myself) followed by those of Peter Singer. Andrew and I managed to persuade the RSPCA to hold the world’s first Conference on Animal Rights at Trinity College, Cambridge on 18th August 1977 and Jon offered to publish the proceedings. These duly appeared in 1979 called Animals’ Rights – A Symposium which was beautifully produced by Jon’s publishing house – the Centaur Press. He was that rare phenomenon – a publisher who was easy to work with!

Jon was born in 1924 and has two children. He wrote The Civilised Alternative (1972) and Food for a Future (1975) which presents the background and main arguments for vegetarianism and veganism. Jon was a conscientious objector during the War and tells the tragic story of trying to comfort a young German pilot in the wreckage of his plane in Kent, while the dying man called pathetically for his mother. In 1954 Jon founded his publishing company which produced editions of Porphyry’s On the Abstinence from Animal Food, Catherine Robert’s The Scientific Conscience and his mother, Esmé Wynne-Tyson’s The Philosophy of Compassion, as well as Janet Walker’s Vegetarian Cookery, Henry Salt’s classic Animals’ Rights and my own Victims of Science (1975). 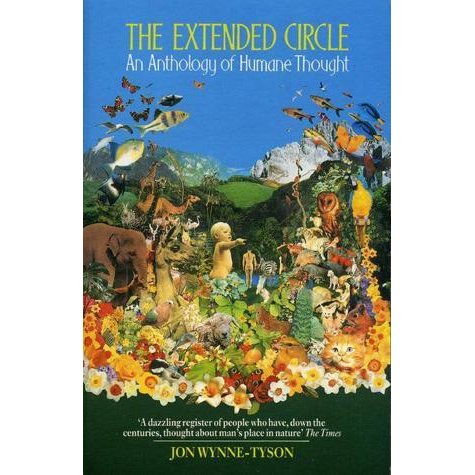 Jon is possibly best known for his wonderful collection of humane and pro-animal sayings and writings, The Extended Circle: a Dictionary of Humane Thought (published by Centaur Press in 1985 and since extended) which was warmly received by both Tom Regan and Peter Singer. Jan Morris wrote, ‘I believe all living things to be of equal value…the rights of animals should be precisely the same as the rights of man’, and acclaimed the book saying, ‘for me the chief splendour of The Extended Circle is its absoluteness’. The book is dedicated to Jon’s mother, contains wonderful quotations from over three hundred writers, philosophers, scientists, statesmen and poets, from Joseph Addison to Emile Zola. It has inspired, armed and fortified animal rights campaigners for over thirty years and will continue to do so. Let Jon have the last word:

Western man is schooled in violence and greed from the moment he is born. The society into which he arrives is incessantly concerned to persuade him of the merits of violence. From the moment that his scarcely co-ordinated fingers try to push away the ‘nice beef stew’ and the small gobbets of flesh that most anxious and deluded mothers try to push into his system (all those battles of the high-chair would hardly be necessary if man was naturally the carnivore that some still claim), the Western baby is learning that his society rests squarely on the credo of ‘I kill, therefore I am’

The Civilised Alternative: a Pattern for Protest