How many times had I seen her that year? Three, maybe four times. Over how many years?

Again, maybe three or four. Usually in the spring when I spotted her from an upstairs window. She would be slinking up the hill, disappearing occasionally into the overgrown ditch and pushing her way along the hedge bordering the big field opposite my house. Trying to be invisible, for very good reasons. Not that the pair were camouflaged in any way because, unless it’s snowing, a white cat is easily spotted, even from my distant vantage point in the bedroom window. There are a lot of predators around here: kites, buzzards, foxes, owls, dogs and, of course men with guns. My heart went out to her, every time I saw her keeping low along the edge of the field, never breaking out into open land but following a line of mixed hedging up towards the top road. I was impressed with her stamina to survive year after year in the wild. I never got close to her and she didn’t come near the houses. One year, spotting in much the same place, slinking along as usual, she was being followed by a miniature version of herself. A kitten. Now she would need extra resources. I had thought about leaving food out for them but hesitated because it would have meant her crossing a much busier road than the farm lane that was the top road, and, frankly, she seemed to be able to look after herself, and feed her kitten. Moreover, I suspected it would start a war with the half dozen or so domestic cats living in our hamlet of twelve houses. I respected and admired the resilience as well as the wildness in her nature whilst being drawn to her because of her strong resemblance to the housecats who are the close companions with humans. I like to think someone rescued and homed the kitten but I will never know. I hope so.

Feral kittens are the deprived, delinquent kids of the feline world, missing out on the early positive experiences with people that make cats such good human companions. Cats Protection Aberystwyth, where I currently volunteer, are often notified about feral kittens and cats. Since volunteering as a fosterer I now know that kittens born of ferals can be socialised and homed if they are caught at the right age.

A single adult feral cat is quite rare. More often they seem to live in colonies, some are fed and cared for by humans and some are just fed. The latter was happening in a remote welsh village that I stayed in during my student days. Several people with good intentions who didn’t want these beautiful, wild animals to go hungry, were feeding and watering them. There were, maybe, half a dozen houses putting food out and there were several barns and wood sheds where they sheltering. Goodness knows how many cats and kittens there were in all because none were neutered and numbers must have been increasing. Following my stay I was given the job of Warden of Halls on the campus of Aberystwyth University and discovered a managed colony of ferals. I now can’t remember whether it was the RSPCA or Cats Protection League but somebody was managing that colony properly; operating a Trap Neuter Return policy. The university/students provided a small shelter and some food amongst the trees on the edge of the campus. TNR is simply neutering as many as possible of the adult cats in a colony and returning them to their territory. The cats are fed and monitored, have safer, healthier lives, and over time the numbers dwindle. Monitoring is often just a case of regularly observing the colony, trapping and treating any sick or injured cats, or any newcomers who haven’t been neutered. 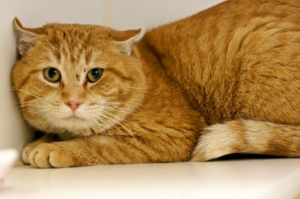 That campus colony no longer exists. So, to my mind the TNR worked: those cats lived their lives happily, in the wild, hunting to feed themselves, until the neutering rendered the colony extinct. In contrast the village on the edge of the Cambrian mountains still hosts, but doesn’t manage (that I know of) their feral cats. Whilst TNR sounds a simple, straightforward process, it is not; it is a difficult, time consuming and strenuous one. Despite the difficulties, I, and many others who work with homeless cats believe it is better for the cat than taking them to a shelter where, well meaning people are unable to cope with their wildness, and they kill them, while the rest of the colony continues to breed. It is better, to my mind to support them to live full, albeit tough and probably short lives, in their own way like my white feral.

There is no happy ending to the story of the white feral. I haven’t seen her for two years now. Who knows what happened to her. I sometimes hear gunshots echoing along the ridges above our village and I know some farmers consider feral cats to be fair game, like foxes, as pests. Was she injured and then simply starved to death, unable to hunt? Has she found a fireside beside which she can live out her old age? Succumbed to predators? I often think of her and remember trying to spot her, looking for an opportunity to make sure she was healthy. It never came. Sight of her lifted my heart: her strength, her ability to feed herself, her bravery and her ability to blend into her surroundings, despite being the wrong colour for proper camouflage. Although it is some years ago now, the frustration I felt at not being able to help her was part of my motivation to volunteer as a cat fosterer and help other cats who were forced to endure the hardship that life throws at some creatures.

This is Gruff, rescued by Cats Protection Aberystwyth at the age of 16 weeks, who stayed with me for about two months and before he left to share the home of an appreciative cat lover. A happy ending.