You can do magic if your heart is right

I’m remembering when I was your age, I would have been sitting here in assembly daydreaming about the things I was interested in: heavy metal music, spotty boys and gloomy black clothes. Floating through my school life, oblivious to the curious world of ‘real’ learning, spirituality, religion     and ethics. So if you have already unplugged my voice and your mind has wandered, don’t worry, I understand – I was that girl at your age!

So what happened to wake me up? How did I get from being that self absorbed young teenager to the person standing in front of you today thinking maybe now I have something to say – and this raihei assembly is    the place to say it? I certainly would never have done this at your age and I admire the way all of you at Friends School get the chance to share what’s important in your life, publicly up here on this stage. 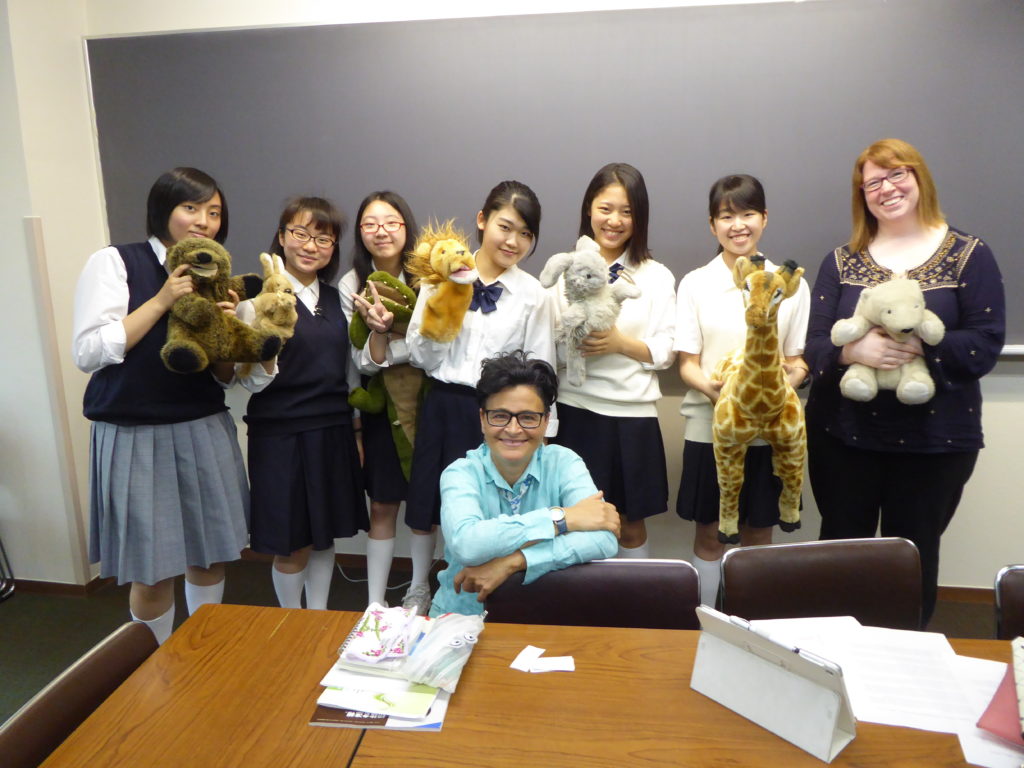 So I was impressed last Friday when 9th grader, Haruka Minamitani spoke about her changing relationship towards pets and other creatures. She finished with the challenge to us all – ‘Maybe it’s time we need to rethink our attitude towards animals.’ That’s what I intend to share with    you today, so maybe my talk follows on from where Haruka left off.

But first – a song, or rather a nursery rhyme – traditional songs which for hundreds of years have seeped into the minds of our youngest children –   we learn them by rote before having any idea of what they are really about!

Sing a song of sixpence, a pocket full of rye,

Four and twenty blackbirds baked in a pie,

When the pie was opened, the birds began to sing,

O wasn’t that a dainty dish to set before the king!

Eek! Birds baked alive! Who would write such stuff? And for children???

Well, it brings me to my story about a pie, which I want to tell you…

When I was your age – about 13 or 14, my mum took us out one day to an English pub in the countryside for a special Sunday lunch. She ordered our meals and a waiter brought them to our table. We tucked into our traditional pastry pies to discover what tasty food lurked within. It looked very pink and mum said the meat was called veal.

‘But it comes from baby cows who are locked up all their life in a cage!’

‘Oh sit down and stop making such a fuss’ said mum.

But I pushed my plate away and ran out of the pub, and ran and ran until I came to a small river where I sat down and wept. I was so miserable, and frustrated, and confused. I had never behaved like this before. I found myself in a complete state of bewilderment for the first time in my life.      And I think it is from that moment I started to wake up and see the world in different ways.

I became a vegetarian in my 20s and thought that was the end of my food story. I didn’t think much about animals for a while. My life was too busy with work and friendships. But later, in my 40s I began to join up all the pieces in my life and in the world. I noticed how everything is connected.  Me, you, our countries, communities, the whole world – everything effects everything else. And that’s when I paid attention to animals again.

Animals are the mystery of nature

One of the things that inspires me is watching films. I love any films with animals: wildlife documentaries, comedies about cats and dogs, animations, whatever. I want to share with you some things I learned about animals   from 3 of my favourite Japanese animations. Totoro! Mononoke! Ponyo! You’ll know them, I’m sure.

Totoro! This is a wonderful creature – a true friend. I learned for instance,  you don’t need to say too much to be a good friend. You need to listen and be willing to roar together. And you can do magic if your heart is right. Of course, you must make sure to get plenty of sleep! Just like the 5 cats I share my home with. They are my friends and companions and remind me to rest and feel peaceful.

In Princess Mononoke, it’s her relationship with the wolves who raised her, that tugs at my heart strings. I’d always thought of wolves as rough, vicious and slightly sneaky creatures, probably from the bias of European children’s stories. But in Mononoke the wolves demonstrate love, loyalty and intelligence. And I was impressed at the end when Mononoke decides to stay with them, rather than be with the humans. She can trust the wolves friendship better than anyone’s.

Ponyo is a gorgeous, comical fish-girl who befriends a little boy. Their friendship builds through adventures and challenges, demonstrating a deep sense of commitment towards one another – an undivided friendship that the other humans find hard to understand – between a boy and a fish!

The mystery of the ocean enthrals me and it’s still an area I have much to learn about and from.

These 3 stories and others like them, play a significant part in my own journey towards compassion and friendship, with all sorts of animals, who come into my life and home on a regular basis: cats and caterpillars, ladybirds and lizards, sheep and spiders, dogs and deer. I watch them, talk to them, listen and learn. They make me wonder and ask some big questions: 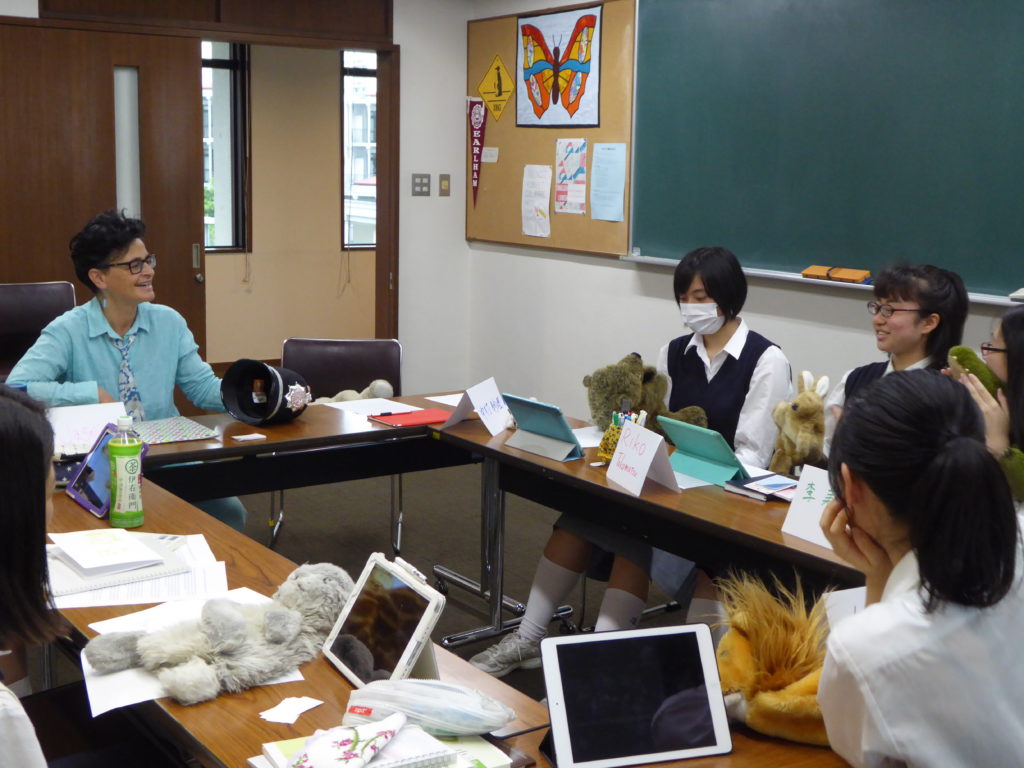 They all run after the farmer’s wife,

Who cut off their tails with a carving knife,

Did you ever see such a sight in your life?

What a gruesome image – astonishing! Maybe we are immunising our children to the suffering of animals, in part, by indoctrinating them with songs like this from birth? Just a theory of mine I’m beginning to unpack. I may be completely off the mark. But I’d be interested to know if you have any songs like this in Japan? The truth is: animals the world over are used and abused – around 3 billion are killed for food every single day worldwide, and many more used for military and scientific experiments, clothing, labour and entertainment.

Quakers were instrumental in the abolition of human slavery over 150 years ago. Before that, anyone or any nation who got rich, considered it natural and acceptable to buy and use slaves. Today, the richer a nation becomes, the more meat it’s population will consume. Isn’t that a kind of animal slavery?

These days I prefer to use the term ‘dead animals’ rather than ‘meat’. It’s the truth. And as a Quaker I am encouraged to speak the truth. Using the word ‘meat’ only distances me from the truth.

So I find I am on a path towards being vegan. I’ve still got many more steps to take but my philosophy is there. Veganism is inspiring many young people across the globe and so I trust and pray that your generation will make some outstanding leaps with these issues of viewing animals as commodities, and speciesism (the accepted notion of human hierachy over other species).

Let’s finish with one of the most well-known of English nursery rhymes:

Baa baa, black sheep, have you any wool?

Baa humbug, I say – let the sheep keep their wool and wander free. We sometimes say, ‘I’m counting sheep’ when we want to get to sleep. But maybe it’s time to wake up. Open our hearts and minds to some difficult truths. Some of us prefer to sleep for a bit longer though. I feel I’ve been in a kind of woolly sheepy sleep for much of my life – Totoro might approve! 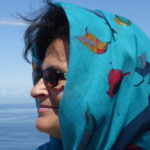 Jasmine Piercy is a British Quaker living in Slovenia. She is a Woodbrooke Associate Tutor and serves as an elder and facilitator for the Friends network around the world. She previously coordinated the Quaker Voluntary Action working retreats programme across Europe and has a background in education and the arts.